Azure vs AWS vs GCP

Note: Based on communication from Amazon, the AWS service mentioned, Amazon Textract, does not currently support handwriting recognition.

Did you know that we can use Artificial Intelligence (AI) to convert a handwritten document into digital text? Did you know that we can also preserve the location of the text accurately? A handwritten letter, postcard or biography could be converted to text using OCR (optical character recognition). At the same time, we can also find out the location (x and y coordinates) of every single character on the image. Location, along with the width and the height of the character, can help us create a digitized version of that document while preserving the original format.

Our data team is comprised of hands-on software architects, data engineers and data scientists that are highly competent in scaling applications and making them high performance. While we have created models like these that work on-premise, we also wanted to compare the current cloud offerings. In this blog post, we will be comparing Amazon Textract, Google Vision, and Microsoft Azure Vision API for recognizing some samples of handwritten text.

The application follows a microservices architecture. We have a load balancer that takes all requests from the browser. The solution follows the following steps: 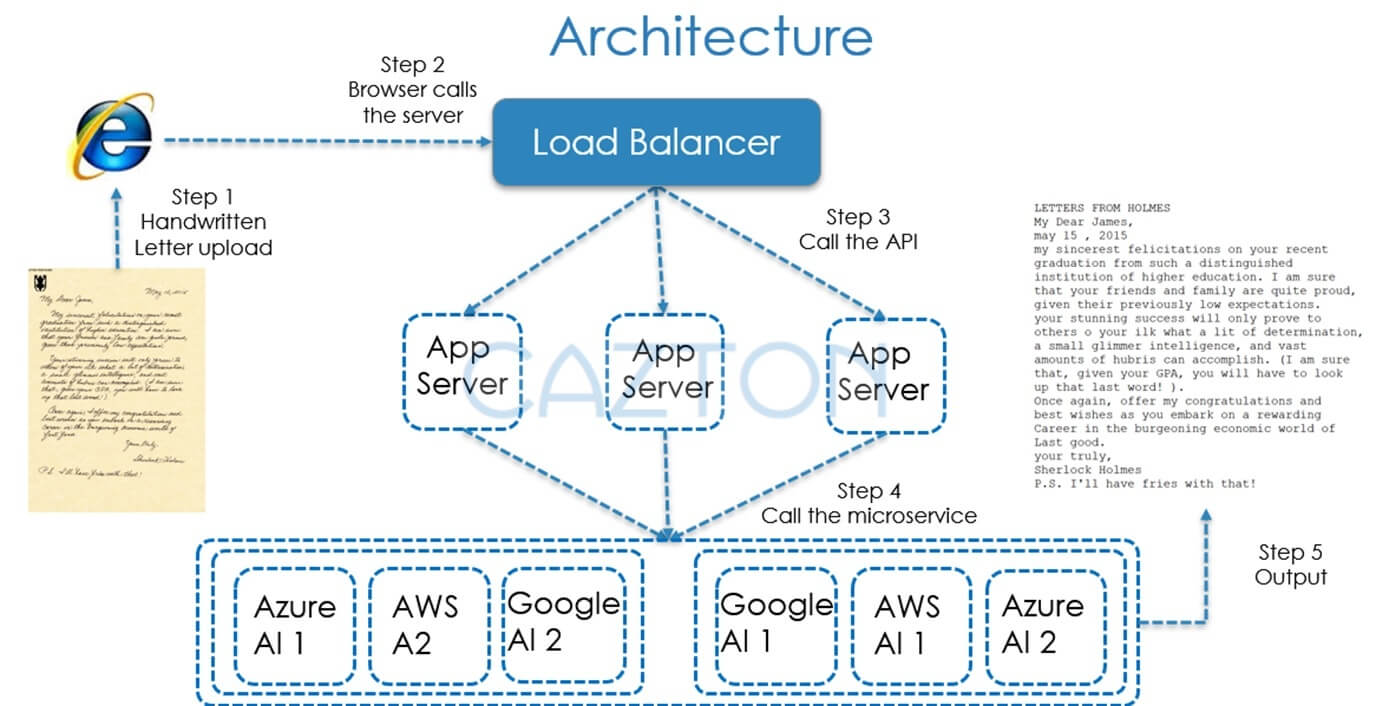 The pre-trained models that convert handwritten images to digitized text are artificial intelligence models that are running in the cloud. The Cazton team has created similar AI models that can run on premise and the architecture we have used here is a multi-cloud architecture. That means it can run on-premise, in a hybrid scenario (which means on a cloud as well as on-premise), and in a multi cloud scenario. However, the point to note is that we can run this anywhere without making changes in the code or the deployment model.

We will be comparing the following three services for their accuracy to convert handwritten documents correctly:

Note: We will be counting word mistakes (i.e. a word, if not ignored, is counted as one mistake if one or more characters in it are incorrectly transcribed by service).

For comparison, we take three sample images found on the internet:

Microsoft makes the least number of mistakes on this image, followed by Google and then Amazon. We will be comparing Microsoft and Google since their mistakes were comparable and not include Amazon in this analysis.

Here are certain results we have chosen to ignore due to the errors of the original drafter:

Here are certain results we have chosen to ignore:

Microsoft makes the least number of mistakes on this image, followed by Google and then Amazon. We will be comparing Microsoft and Google since their mistakes were comparable and not include Amazon in this analysis.

In the above image, if we look at the word "Jelicitations", Google Vision API almost gets the entire word correct except for the first character. The closest word that matches the digitized text "Jelicitations" is "Felicitations". A possible solution for such an error would be to check the probability along with natural language processing.

For example, for the alphabet "J" if the AI engine gives a probability of 0.9 out of 1 and for the alphabet "F", it gives 0.8 out of 1. We could then use natural language processing to get the nearest correct word that matches a word in our dictionary. In the above image, it would be giving more priority to the alphabet "F" over "J".

Google makes the least number of mistakes on this image, followed by Microsoft and then Amazon. We will be comparing Microsoft and Google since their mistakes were comparable and not include Amazon in this analysis. 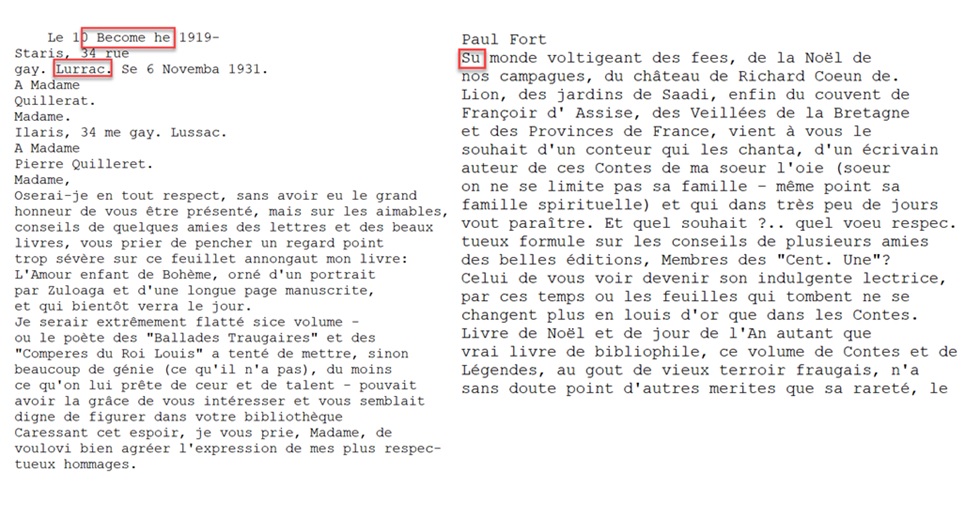 Disclaimer: These results are based on the state of the AI models on May 20, 2020, and have been examined using a limited dataset. The results can change over time with newer models or better training of existing models. 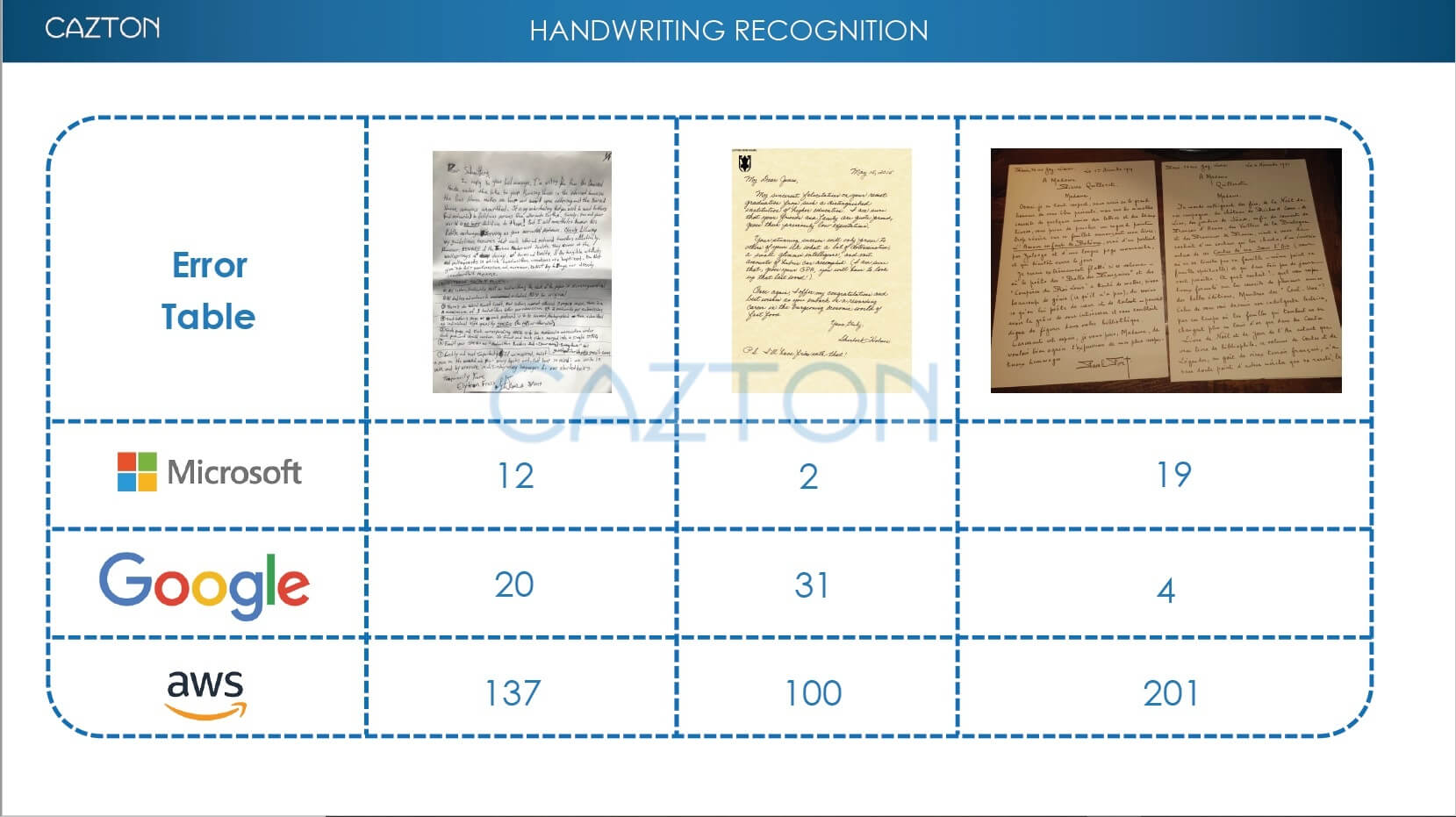 If your company is building applications using Big Data and Artificial Intelligence or creating web or mobile applications on cloud, microservices or on-premise, please check our services to find out why Fortune500 companies use Cazton for building multi-billion dollar revenue generating applications.