Do you face problems while scaling data in memory? Are you facing slow processing times? Do you want scalability and as well as atomic transactions? Do your machine learning models require a lot of time for training and production? Are you looking for SQL ACID transactions in distributed computing environment? Recently, Ignite processed 2.5 TB in production flawlessly.

Wait no further, here is the solution. Apache Ignite is an open source distributed database, caching and processing platform which handles terabytes of data with in-memory speed. The difference between Ignite and a classic distributed cache is that, with Ignite in addition to key-value pairs we can run distributed SQL queries for joining and grouping various data sets. Even with distributed SQL queries, we can execute multi-record and cross-cache ACID transactions, with the help of shared or unified in-memory layer. Some of the other features that come up with Apache Ignite are:

Contact us now to know more about Apache Ignite’s capabilities as a distributed database and in-memory computing. Now that we have a good overview about what Ignite is, let’s deep dive into it.

Apache Ignite can be utilized as a: 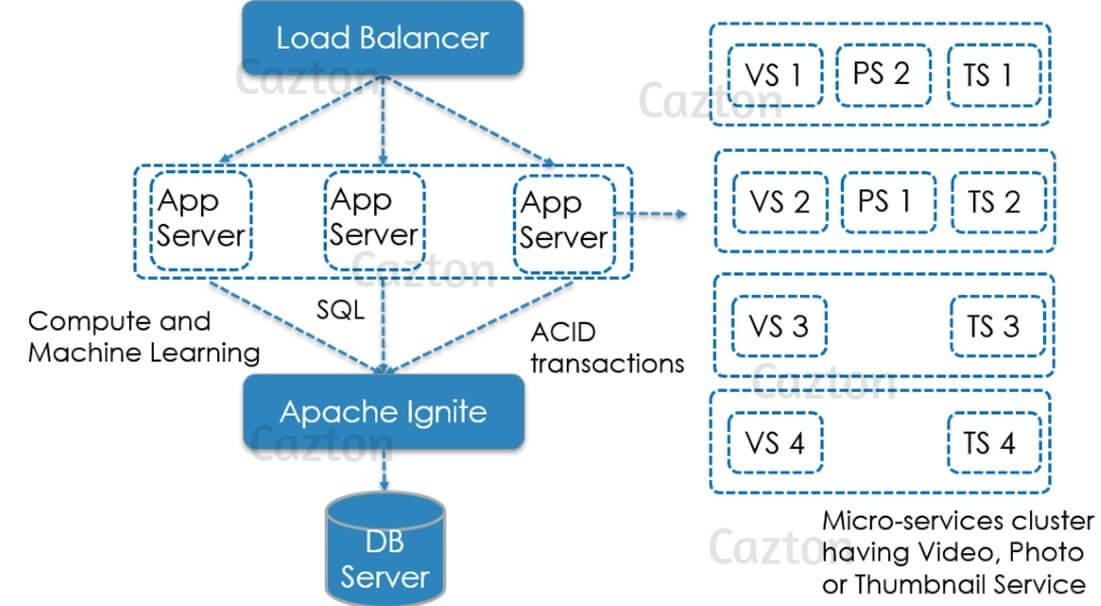 Ignite also acts as a Digital Integration Hub by enabling large-scale and high-throughput architectures. This avoids complex integrations between back-end databases and front-end API services. It can support both uni-directional and bi-directional synchronization between an Ignite cluster and an external store database using Kakfa, Spark or Debezium.

It offers data grid capability – partition and caching data capability in memory. Each cache represents an entity of the database and can be split into a fixed set of partitions evenly distributed among cluster nodes. There is always a primary partition and can have its zero or more backup copy partitions.

Ignite is 100% JCache (JSR 107) compliant in-memory data grid which includes basic cache get/put operations, Concurrent Map APIs, Entry Processor and Cache Interceptor APIs, events and metrics. For applications which requires consistent response time ranging in microseconds, the ‘near cache’ of Ignite can be used to store the most frequently used data on the application end. It automatically invalidates and updates the near cache. Once a change is made to the primary copy of a record, Ignite will immediately propagate the change to all the nodes. This includes the nodes which store the backup as well as to the applications which store the record copy in the near cache.

Database components of Ignite scales horizontally in such a way that every node in a cluster hold a portion of key-value pairs using a hash function. The data is rebalanced automatically when a node is added / removed from the cluster, in order to spread the workload and achieve an even data distribution.

The nodes of the cluster are divided into:

A co-located join (which are basically tables joined on partitioning column) avoids data shuffling between nodes and minimizes network usage because the calculations are done on local datasets of the cluster nodes. To use co-located processing, the datasets are co-located by storing the related records on the same cluster nodes (called as affinity co-location). The application will execute a query and Ignite will get the records from both memory and disk automatically. In case of a cluster restart, Ignite will read the data and index from the disk avoiding any potential downtimes.

Memory architecture of Apache Ignite is composed of two storage tiers, aka, "durable memory" – memory and disk tier. It is fully operational from the memory tier, but it can store the data on the disk too, hence making it durable. If the data is large, then memory tier caches as much data depending on the capacity. For example, if there are 100 entries in database and the capacity of memory tier is 40, then 100 are stored in the disk and only 40 of them will be cached. In case of a cache-miss, ignite reads it from the disk automatically regardless of the API, whether you use SQL, key-value or scan queries.

It uses a model like virtual memory of Unix by using paging for memory space management and data reference. However, the indexes here on the whole data-set are stored on the disk (assuming the disk tier is enabled) instead storing them on disk only when it runs out of RAM (for swapping).

Can Ignite be ACID compliant and at the same time follow CAP theorem?

Short answer is "No". As Ignite is distributed system, CAP theorem does apply. Long answer depends on the context it is being used in. Database systems designed with traditional ACID properties such as RDBMS choose consistency over availability, whereas systems designed around the BASE philosophy, common in the NoSQL movement, choose availability over consistency. It follows from the CAP (Consistency, Availability and Partition tolerance) theorem that at a time of partition, one must choose between consistency and availability.

In transactional mode, you can get consistency with full ACID compliant transactions. On the other hand, In atomic mode, you benefit from the speed and availability. Interestingly, we can mix both modes in your application, by having a few ACID batch-sets and then a few atomic mutations.

How does it support ACID properties?

Ignite supports all DML commands including SELECT, UPDATE, INSERT and DELETE queries, in addition to a subset of DDL commands related to distributed systems. It supports primary and secondary indexes, although the uniqueness being enforced only on the primary index. However, it does not support foreign key constraints, which is primarily to avoid broadcasting messages to each cluster for an update (doing so could have affected performance and scalability).

All the transactions are ACID-compliant and span multiple cluster nodes and caches for both ‘memory’ and ‘disk’ tiers. This requires the transactional engine to have some functionality to handle data in failed transactions to avoid causing inconsistencies in the cluster. It uses the two-phase commit (2PC) protocol for these distributed systems to ensure ACID properties. Two-phase commit consists of a commit-request phase (or voting phase) where it votes to commit or abort the transaction, and second being the commit phase where it decides its action based on the voting done in previous phase. So, Ignite keeps the transactions in a local transaction map until they are committed, after which the data is transferred to the participating remote nodes.

Is it necessary to use 2PC protocol in Ignite?

No, users can configure the system to relax the two-phase commit protocol and enjoy all the performances of an "eventually consistent" solution. The ability to configure the full transactional behavior of database or to forego some consistency for performance makes it more flexible.

It uses the write-ahead-logging (WAL) technique of storing changes in database, where the changes are first stored in logs on a stable storage, before they are written to the database. Now the changed (dirty) page is copied to the partition files by the ‘checkpointing process’. The purpose of WAL is to propagate updates to disk in the fastest way and provide a mechanism supporting full cluster failures. As the WAL grows, it periodically gets checkpointed to the main storage.

Is Ignite a pure in-memory database or persistent too?

Well, it’s both, and can be turned on and off as required. Ignite’s Native Persistence feature when used as a key-value store setting, caches the data in memory and persists it to the disk rather than writing it to an external database. This feature enables it to skip the cache warming step as well as to skip the data reloading phase from external databases. Additionally, the feature always keeps a copy of data on disk, so that you can cache a subset of records anytime you like. If native persistence is used, and a cluster or an individual node goes down in middle of the transaction, it ensures data consistency. Native persistence uses write-ahead-logging (WAL) which ensures all changes are written to a log before they are persisted to the disk.

Can it handle Big data and apply Machine Learning?

Yes, it can handle both. Machine learning requires a lot of data movement across the network and data scientists are often troubled due to the constant data movement and the lack of horizontal scalability. First, they would have to fetch the data to a system such as Apache Mahout or Apache Spark for training purposes. The whole process involves moving terabytes of data and can significantly increase compute time. Second, large data sets can be trained using Apache Spark and TensorFlow, but that is just a part of a problem. They must deploy the models in production too.

Ignite’s multi-tier storage comes to the rescue for both problems. It allows users to run Machine Learning model training and inference directly on the data stored across memory and disk in an Ignite cluster. With the in-house optimized algorithms for co-located distributed processing, they provide in-memory speed and unlimited horizontal scaling when running in place. This way it enables continuous learning that improves decisions in real-time. All the process is fault-tolerant, which means in case of a node failure, learning process won’t be interrupted and we will get the results similar to the case when all nodes were up and running.

It can be deployed on the cloud services (such as AWS, Microsoft Azure or Google Compute engine) or on the containerized environments (such as Docker, Kubernetes, VMWare, Apache Mesos)

How can Cazton help you with Apache Ignite Consulting and Training?

We have experts who have used Redis in many multi-million dollar projects with data up to a petabyte scale. We have real world experience using this technology and leverage its overall capabilities in many different scenarios. We offer the following services at the Enterprise level, team level and/or the project level:

At Cazton, our team of expert developers, consultants, architects, data analysts, data scientists, DBAs, awarded Microsoft Most Valuable Professionals and Google Developer Experts understand the changing requirements and demands of the industry. We help you make the right decision to achieve your business goals. We have the expertise to understand your requirements and tackle your data problems. Learn more about database, cloud, big data, artificial intelligence and other consulting and training services.

Want to know more about our Apache Ignite Consulting services?