TypeScript: Beginner to Advanced (In One hour)

With the recent endorsements of Google Angular team and Microsoft ASP.NET team, TypeScript is bound to be popular. In a recent survey by the Angular team, 45% (Maximum votes) of the surveyants voted in favor of TypeScript, followed by Babel (31%).

In this Webcast, Internationally acclaimed speaker, Google Developer Expert and Microsoft MVP - Chander Dhall will walk you through TypeScript Code and Concepts. This talk is completely free and will mostly involve code. 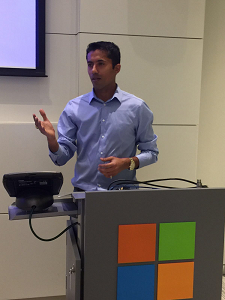 As an Azure Advisor, ASP.NET Insider, Web API Advisor, Cosmos DB Advisor, and an MVP for Visual Studio and Development Technologies, Chander has insight into new releases on technologies used by millions of developers. His critical advice, impeccable vision, futuristic strategy backed with creating and establishing best practices in the industry are some of the reasons for his unparalleled success. He has a breadth of experience in multiple different technologies: Cloud (Azure, AWS and GCP), Full-Stack Web Development (.NET Core, Java, Angular, Blazor, React and Node.js) and Big Data and AI (TensorFlow, Spark, Hadoop, Ignite etc.).

At the same time, he's a voracious and highly-respected speaker. He has keynoted and delivered hands-on workshops at top conferences including Microsoft TechEd, Google DevFest, Azure Dev Days, NDC London, DevSum Sweden, BuildStuff Lithuania, MVP Mix (Toronto, San Francisco and Dallas). He has been invited as a technical judge and mentor at top universities like MIT, Harvard and UT Austin. He is the author of two books: Scalability Patterns and Building Single Page Application Using ASP.NET Core & Angular. He has utilized his amazing business sense having started Cazton with zero funding and turned it into a multi-million-dollar company in less than two years.

Chander has been trained in the rare Himalayan style of Yoga, Pranayama and Ayurveda since the age of four. He has written books on improving immunity and incorporating ancient eastern wisdom in a western lifestyle. When he's not working, he enjoys traveling the world with his wife and three kids. When in Austin, they spend their time hiking, kayaking and boating with their dog, Friday.

Disclaimer: Cazton will not sell your account information to anyone. The email that we receive after your login will be used to send the meeting information. Results of the survey will be published as a whole and anonymously. To learn more, please read our privacy policy and terms and conditions.